Hoan Kiem Lake is a natural freshwater 12-hectare lake. Acting as a rain reservoir and climate control support for the area, it is Hanoi’s heart, the center of spiritual and cultural life.

About 6 centuries ago today’s lake as in fact the smaller top half of a much larger body of water. The lower part, called Huu Vong Lake (which no longer exists), was linked to the Red River by a small tributary. The lake extended southwards to the area of Lo Duc and Hang Chuoi streets in Hai Ba Trung District.

Hoan Kiem wasn’t its original name either. In centuries past, it had three previous names. The first was Ta Vong, followed by Luc Thuy in honor of its wonderful emerald green-blue color. In the 17th century it was called Thuy Quan lake as the king at the time used the lake for training his navy. Since the 18th century it has been known as Hoan Kiem Lake, its 4th official name, in honor of a 15th century legend.

King Le Loi (aka Le Thai To) founded the later Le Dynasty, an enlightened golden era in Vietnam’s history. Born in 1384, he was a great Vietnamese hero, the perfect embodiment of a just and wise leader. A little like the legend of King Arthur, Le Loi had a magical powerful sword, ‘The Will of Heaven’ (Thuan Thien), given to him by the Dragon King which he used to defeat the Chinese Ming invaders. It gave him the strength of many men. Legend says that in 1428 when Le Loi was boating on the lake (Luc Thuy at that time) a golden Turtle suddenly surfaced, took the sword from him returning the depths below. Neither the sword nor the turtle were ever found. Le Loi concluded that the Turtle God ie. the golden turtle had come return the sword to the Dragon King who lived in the lake. In recognition, the lake was renamed Hoan Kiem Lake: Lake of the Returned Sword or Sword Lake.

The Turtle God and Dragon King may be fiction, but one auspicious fact is true. Hoan Kiem Lake has been home to a number of rare ancient Yangtze gigantic softshell giant turtles. The 4th and last one died in January 2016. It was an auspicious moment if one glimpsed Cu Rua (the grandfather turtle) surfacing. This last turtle was one of only four living in the world at the time. Its death was a very sad and poignant moment for Hanoians and Vietnam. It had been much loved by the whole country; it was a famous celebrity and Hanoi’s sacred animal – and many even believed it to be the incarnation of the mythical Turtle God. 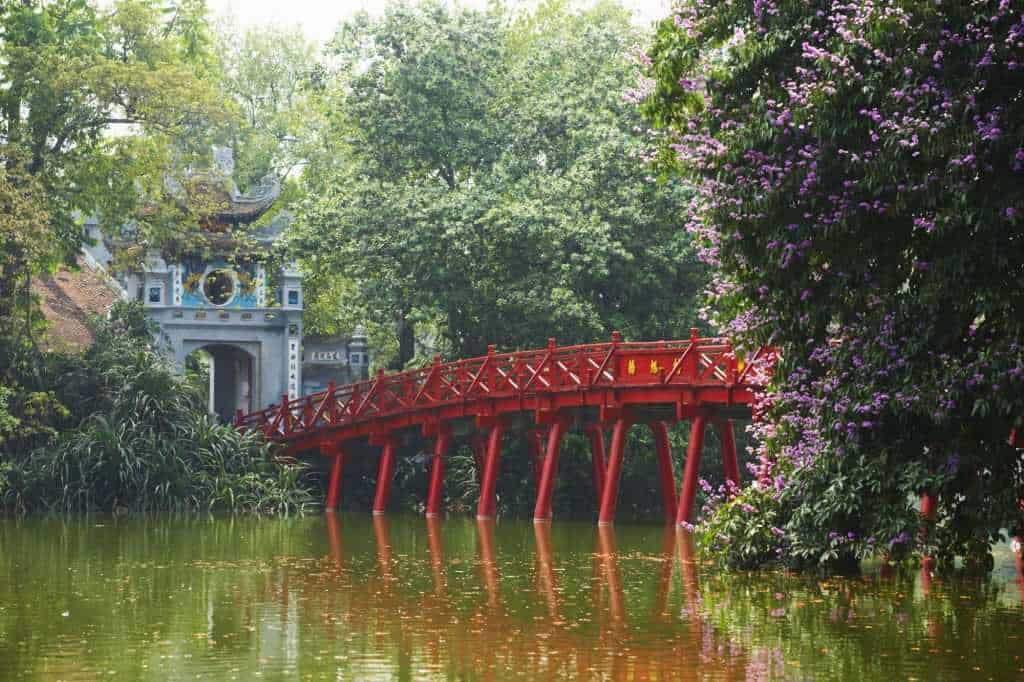 Staying with the turtle theme, in the middle of the lake on a tiny islet is the small Thap Rua (Turtle Tower). This was where another Le Dynasty king, King Le Thanh Tong, used to fish. It is believed that in 1886 an unpopular Vietnamese official and mediator between the Vietnamese and French troops, Nguyen Ngoc Kim, secured permission to build this tower supposedly in memory of King Le Loi. However, he secretly schemed to bury his father’s remains on the but his father’s body was removed as soon as the local people discovered his deception.
The three-storied tower’s foundations date back to the 19th century, the architecture is a combination of local Vietnamese and French colonial styles. On top of the tower there used to be a 2.85m tall mini Statue of Liberty gifted by the French Government to Hanoi in 1887 during the Tonkin Expo. Considered a symbol of colonial government it was removed in August 1945. The tower remains and is an important Hanoi symbol of peace, harmony and patriotism.

Dotted around the lake are many important cultural and sacred places of interest. One such monument is Ngoc Son Temple – Temple of the Jade Mountain. Built in 1841 on Jade islet north of the lake, it is linked to the land by the vermillion red wooden arched Huc Bridge (Rising Sun bridge). The temple is dedicated to a number of Confucian and Taoist scholars as well as General Tran Hung Dao. The General, a great 13th century military leader who defeated Kublai Khan’s soldiers, is revered throughout Vietnam. In addition, displayed in a glass case at the temple, is the 3rd of the four giant turtle specimens. Weighing 250kg it died in 1967 despite efforts to save it.

Since October 2016 at weekends roads circling Hoan Kiem Lake are pedestrian only. This is part of the city authority’s initiative to promote the importance and value of the area, drawing visitors and local Hanoians to Hanoi’s heart to enjoy the environment, entertainment and culture. Just as the turtle represents longevity, endurance, persistence so Hoan Kiem Lake strengthens its immortal and endearing role symbolizing Hanoi’s soul and what the city stands for.