Described by French historians as ‘The Valley of the Kings’, My Son or holy land is the site of temple towers and a former imperial city of the Cham people.  The ancient Indochinese kingdom of Champa, arose in the 2nd century AD surviving to the 17th century. Occupying the coastal area of central Vietnam and into what is now Cambodia and Laos, it was a Hindu based civilisation influenced by India.  In 192 AD there was an uprising against dominating Chinese warlords leading to the creation of Champapura or ‘City of the Cham people’.  The political capital city of this independent state was called Simphaparu (meaning Lion Citadel), now Tra Kieu village. The Cham were a seafaring nation and at the civilisation’s height it controlled the spice and silk trades between China, Indonesia, India and Persia. 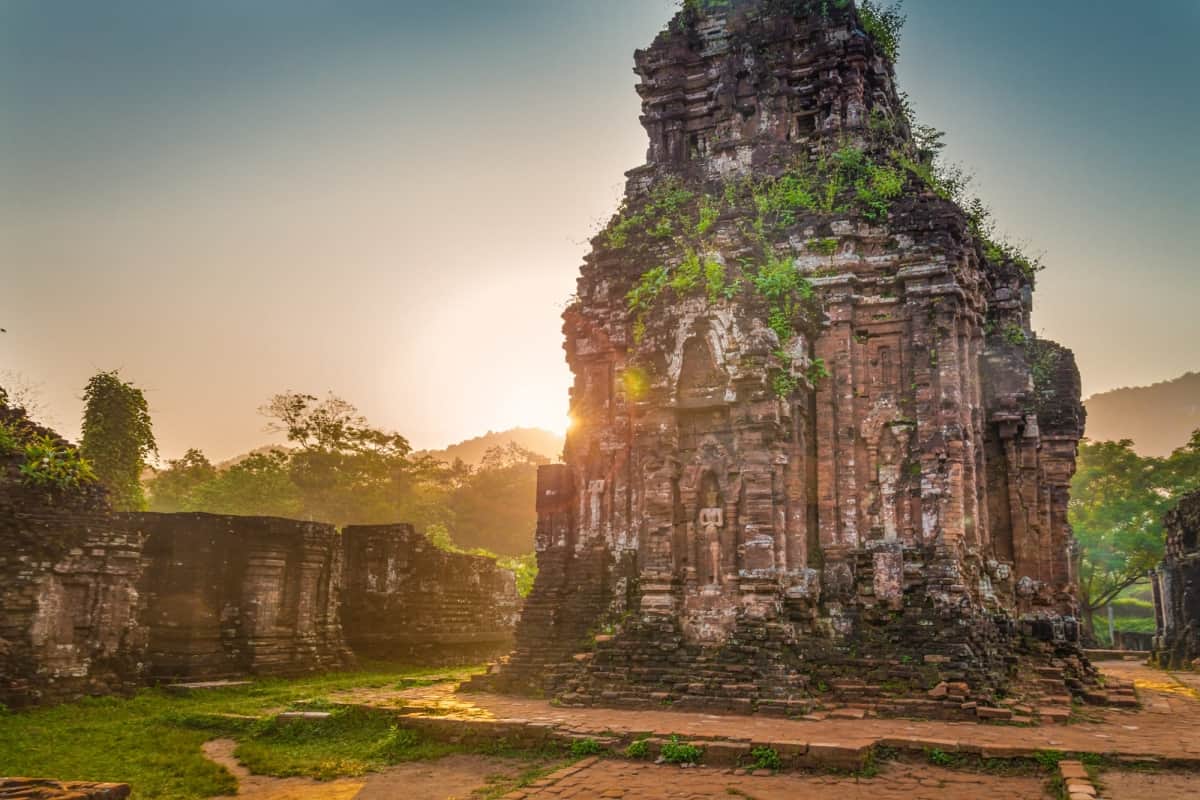 While the Cham’s livelihood was based on rice cultivation and fishing, they were also incredible master craftsmen when it came to building temples. Of the 225 Cham vestiges in Vietnam, one of the most prominent and significant centres of major SE Asian Hindu shrines is the My Son Sanctuary.

Considered as the longest inhabited archaeological site in Indochina, the My Son sanctuary was the religious capital of the Champa Kingdom from the 4th to 13th centuries, the centre of culture and belief, and burial place of kings.

Strategically located, set in a small valley Du Phu Commune, Quang Nam province, and surrounded by two mountain ranges, the temple ruins complex embodies a unique and great architectural achievement.  The tower temples were constructed over a 10 century period. As each new monarch acceded the throne, he would come to My Son for the purification ceremony, present offerings, erect new monuments, and remodel existing ones.  Hence the complex expanded, its creation providing evidence of the Cham’ technological sophistication, masterful engineering skills and advanced brick construction.

After the Cham civilization declined, a Frenchman, Camille Paris, made a remarkable discovery. Born in 1856, he was an official in the French colonial administration in Vietnam. In 1889, overseeing the construction of a telegraph line in central Vietnam, Paris stumbled across the forgotten world of the My Son ruins.  He died in 1908 and another Frenchman, Architect and Archaeologist Henri Parmentier undertook the first excavation and conservation work between1903-04.  He documented 71 temples classified into 14 groups, assigning letters A, A’, B, C, D, E, F, G, H, K to the 10 main groups.   32 stele with Cham and Sanskrit inscriptions were also catalogued. These bear inscriptions about political and religious matters from the view point of the kings to confirm their legitimacy or make gifts to the gods.  French scholars carried out the first a restoration project from 1937-1943. Today, about 20-25 lower temples remain preserved and well maintained but many others were destroyed during the Vietnam war and many artefacts are housed in the Da Nang’s Museum of Cham Sculpture.

The Cham worshipped Hindu gods and many of My Son’s temples were built to honour Krishna (a supreme god), Vishnu (responsible for creation) and the mighty Shiva (the destroyer).  Following the same model layout, the temple ‘families’ covered a total area of 142 hectares.  Records indicate the very first temple, dating from the 4th century, was made of wood.  After it was destroyed by a major fire two centuries later, apart from one stone structure, all subsequent creations were made of red fired brick with stone pillars and sandstone bas-relief depicting Hindu mythology.

Each group consisted of a brick tower sanctuary (kalan) surrounded by towers and periphery monuments. This main pyramid tower, was dedicated to Shiva. It symbolized the sacred Meru Mountain ie the centre of the universe, home of the Hindu gods and hence the King’s divinity.  The smaller temples were devoted to spirits of the eight compass points while the gate tower faced eastwards to welcome the sun.

The structures were internally plain and dark; the towers had windows not the temples. Alcoves inside held lamps, the curved roofs would have been covered in gold or silver leaf, and the towers were connected to one another by elaborate series of friezes carved into the brick.  Even now it is not completely understood how the Cham people had been able to construct such monuments and connect the material through this incredible feat of brick construction.

On December 1992, at UNESCO’s 23rd World Heritage Committee meeting in Morocco, the My Son Sanctuary was officially announced as a UNESCO World Heritage Site.  It has rightly been recognized for an exceptional example of cultural interchange, for the introduction of Hindu architecture into South-East Asia and of course clear evidence showing how remarkable the Champa civilization was.