A bridge between the past, present and future

Dr Vu Manh Ha, Deputy Director of the National Museum of Vietnamese History once described Long Bien as “a work of art in the shape of a dragon undulating across the [Red] Hong River….”

The dragon, one of the four sacred animals in Vietnamese heritage, symbolizes national power and prosperity. Long Bien Bridge (‘long’ means dragon, ‘bien’ means edge) lives up to its namesake.  Stretching majestically 2,290m across the mighty Red River, Long Bien Bridge, with 19 steel beams on 20 supporting columns, links the two districts of Hoan Kiem and Gia Lam. At the time it was the first steel structure to span the Red River and once the largest bridge in French Indochina. 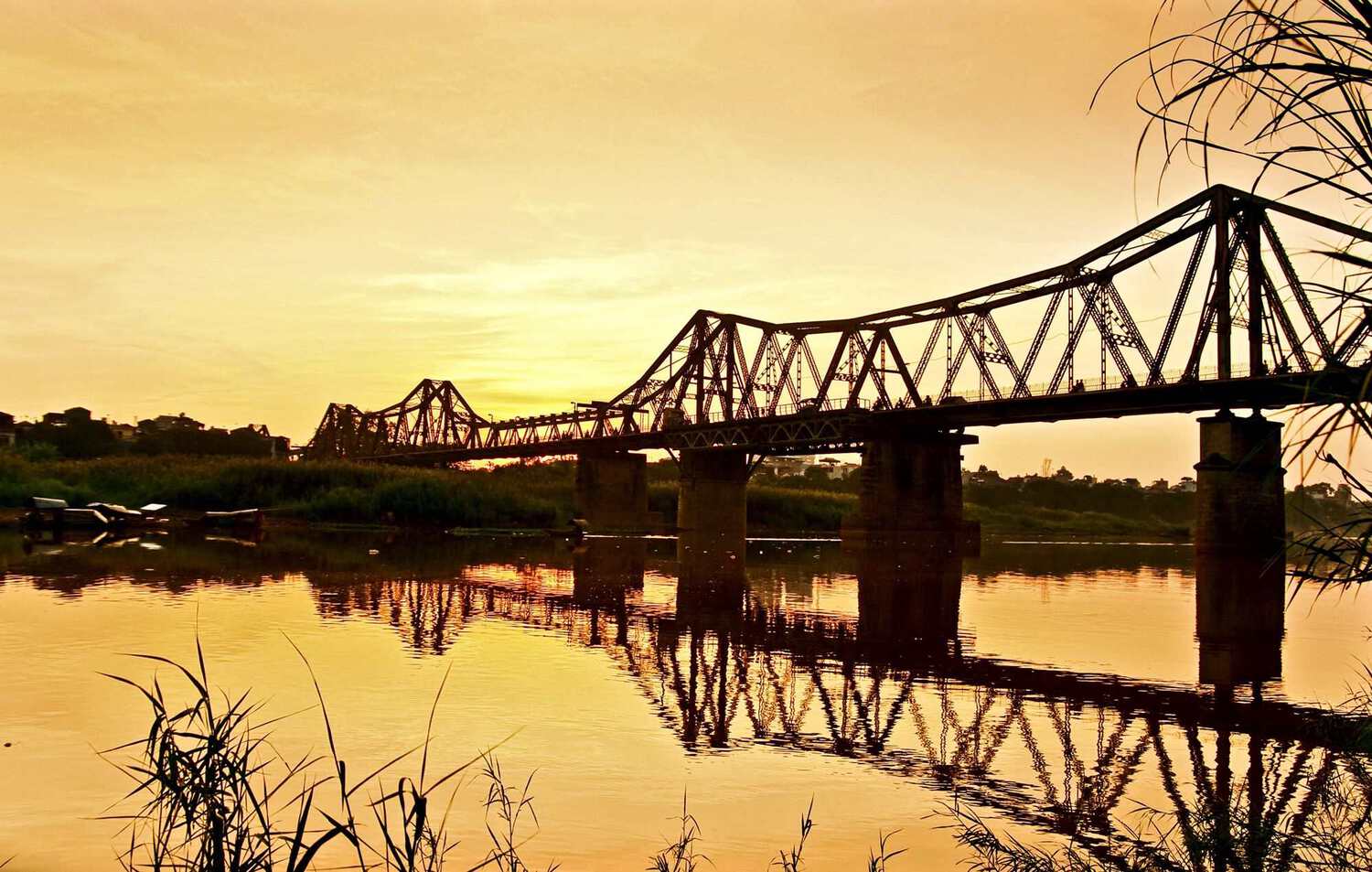 Originally called Paul Doumer Bridge, after the Governor-General of French Indochina (1897-1902), the bridge was a structural masterpiece, the epitome of Doumer’s great ambitions.  A traffic management master plan – a system of roads, railways and seaports – was envisaged in order to strengthen French control of the region, demonstrating France was ‘here to stay’.  Despite some opposition, construction of this historic cantilever structure was approved. At the time it was one of the four greatest bridges in the world and one of the greatest engineering accomplishments of the French colonial government.

Following a tender process, the contract was awarded to French architects Daydé & Pillé of Paris, experts in bridge construction.  Work took around three years from 1899 to 1902 (less than the estimated five years) with an initial budget of 5,390,794 French Francs rising to 6,200,000 by completion.
40 French supervisors and engineers oversaw the construction, employing more than 3,000 labor. Much of the material used in the construction was locally sourced including wood from Phu Tho, Cement from Hai Phong and lime from Hue, although the steel beams came from France. This feat of engineering used 30,000 cubic meters of stone, 5,600 tonnes of rolled steel, 137 tonnes of cast iron, 165 tonnes of iron and 7 tons of lead. Contrary to general assumptions, Gustav Eiffel (of Eiffel Tower fame) did not appear to be involved at any stage in the design and construction, while still evident today the bridge retains the metal plate engraved with the text ‘1899-1902 – Daydé & Pillé, Paris’.

The bridge was inaugurated on 2 February 1902.  The first train crossed on 28 February that year and traffic was accepted in 1903.  At the time it was the only bridge connecting Hanoi and the major port of Hai Phong. While it was strategically important in securing French control of north Vietnam, the bridge also played a crucial role in Vietnam’s fight for independence.  Many Vietnamese from the countryside traversed the bridge en route to Ba Dinh Square where President Ho Chi Minh delivered the Declaration of Independence in September 1945.  Long Bien bridge played a vital role in ending the first Indochina war (1946-54).  During the battle of Dien Bien Phu, it was the main transport and supply route from the north to the battle site near the Laos border. Hence, its valuable contribution to the Viet Minh’s victory over the French which ended the 8-year old war in March 1954.   After this defeat France pulled out of Indochina. Civilians and French troops left Hanoi crossing the bridge on foot and by train with the final contingent of French soldiers departing on 9 October 1954.   The name Paul Doumer also left with them and after 1954 the Vietnamese authorities renamed the bridge Long Bien.

The bridge faced war time again during the American war.  Given its strategic importance, it was bombed 14 times in 1967 and 1972.  But this resilient bridge bounced back to life.

Its formidable and imposing iron frame has long been the subject of patriotic songs, poems, literature and an eternal subject for painters and photographers.  The Bridge has a daily life of its own both above and below.  Although in 1924 cars were allowed to drive over, it has long been closed to motor vehicles (which now use the other five bridges that span the Red River – Thang Long, Nhat Tan, Chuong Duong, Vinh Tuy and Thanh Tri).  The central section of Long Bien Bridge carries a single train track servicing the Hanoi-Lang Son rail line, with inner borders for motorbikes and cycles while the outer edges of concrete slabs resting on steel frames form the pedestrian walkways. Informal commerce takes place at various points along the bridge with vendors selling fruit, vegetables and snacks while it continues to be a favorite wedding photo spot and a dramatic place for morning and evening exercise.  Stretching below Long Bien Bridge are market gardens, farmland, communities of floating houseboats and passing river traffic.

In 2014 Long Bien bridge was recognized as a national historical site. The bridge has a unique history. It has contributed to war efforts and economic and industrial advancement. It is a work of art in its own right. It is a source of pride for the Hanoi people and a symbol of enduring strength of the Vietnamese nation.