When you book with an account, you will be able to track your payment status, track the confirmation and you can also rate the tour after you finished the tour.
Sign Up
6916

Due to its design and layout, Dragon’s Pearl is most suitable for a large or sharing group of travellers.

Dragon’s Pearl possesses 11 Deluxe Cabins, which can serve up to 20 guests at one time. All of Dragon Pearl’s tours are operated in the magnificent Bai Tu Long Bay, one of the few purest areas in Halong Bay. It is a great occasion to visit the amazing natural landscape of Bai Tu Long Bay, the home of various rare flora and fauna.

(*) Vietnam Visa on Arrival (VOA) is quite different from the normal “on Arrival” concept. If you wish to do the VOA service here, you need to employ an agent in Vietnam (like our hotel) to obtain an official of approval letter for VOA before you arrive. Later, at the airport this letter must be showed together with your valid passport to get the Visa stamped.

Yen Duc is a beautiful Vietnamese village on the way from Ha Long Bay to Hanoi, which can provide many cultural experience and Vietnamese local life in rural area. Within 5 hours tour in this village, you can get a glimpse of village life and delicious Vietnamese cooking dinner.

This itinerary might subject to changes without prior notice. Please get final information from our sales staff before your date of cruise. 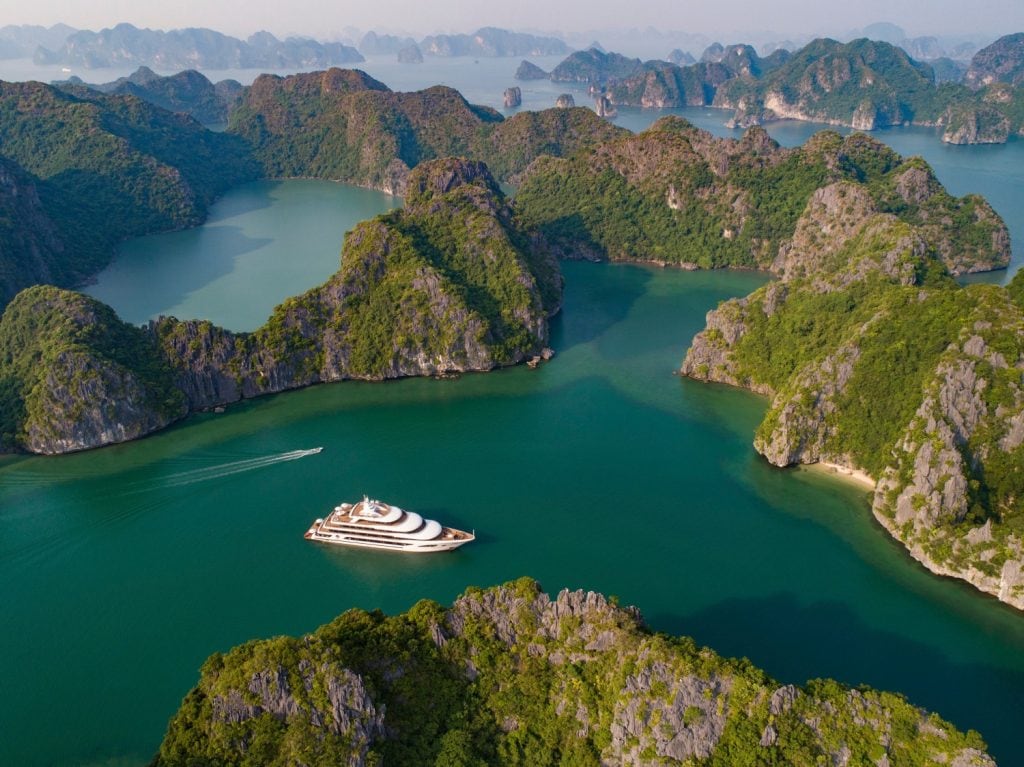 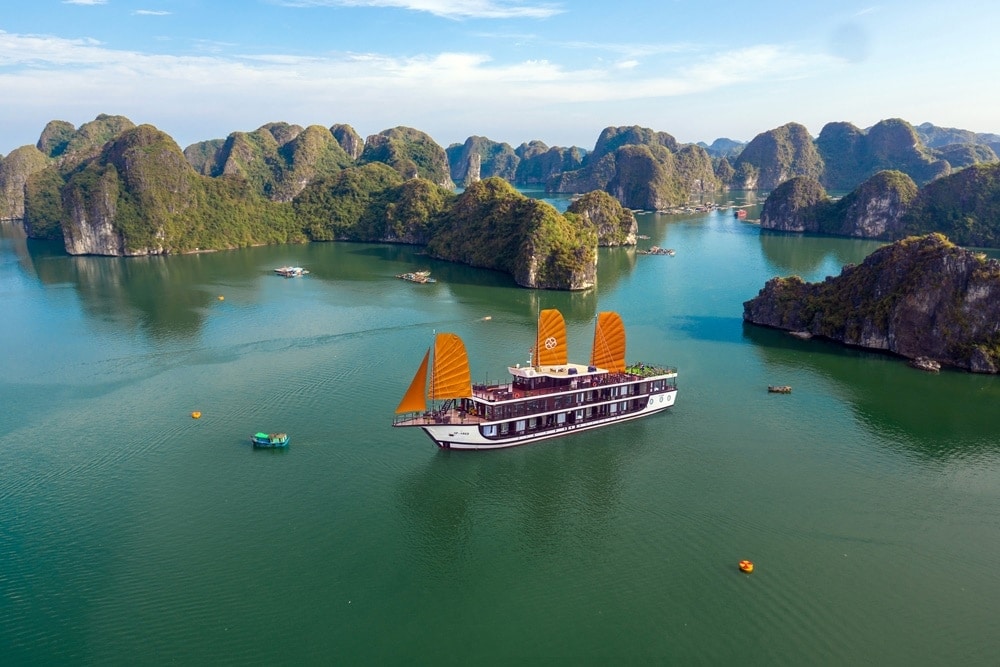 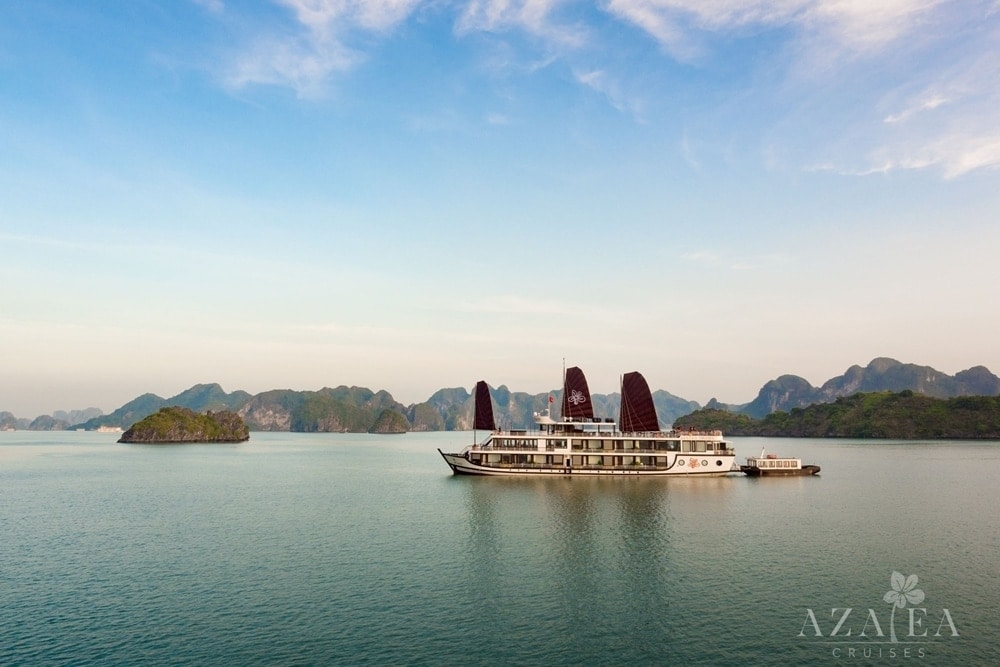 What an amazing cruise on the Dragon Pearl junk in Halong Bay . 11 cabins on this beautiful wooden boat which has a very colonial feel about it . Our cabin and beds were very comfortable with an en- suite bathroom with shower . We sailed to Bai Tu Long Bay where we kayaked around limestone karsts in various shapes and forms . Fabulous Vietnamese meals on deck surrounded by stunning scenery . A must !

We booked the day tour in Ha long Bay with them. The service is good, the schedule and travel plan is great.

Two days one night and what a great experience quietly cruising through these amazing rock formations and the visiting a floating town were you are taken in a small rowing type boat around some of the super rocks just sticking up out of the sea.before returning back to your boat for what I can only call a feast of food and a great nights sleep hurry though this is all going to stop in 2019 no more staying overnight this is half the fun.

Indochinajunk are an outstanding company. everything was excellent from start to finish. The mini van we were picked up with was the most luxury van I’ve ever sat in. It’s a fairly long drive from Hanoi so it was nice to be comfortable.

The boat itself has 9 cabins, but one was empty so there was only 16 passengers who came from wide ranging backgrounds and of all ages from 18 to 65. we had a Canadian TV reporter and his producer girlfriend, 2 New York Lawyers (amazingly, for American lawyers, they were really nice people), a waiter, a carer, some retired people, computer programmer, etc. American, British, French, Austrian, German and Dutch nationalties were there, but luckily everyone spoke English. Probably the best thing about the tour was how friendly everyone was. we moved around at mealtimes so that everyone ate with everyone by the end of the trip. My wife and I are not always that sociable but it was natural here and we really enjoyed the company.

We did the three day two night trip and I recommend this as you go further away from the tourist areas and it also gives you more time to get to know everyone. The kayaking on the second day was a highlight, and we saw no other boats apart from a few local fisherman. Indochinajunk seem to have a special license so that their customers get to go to the best places first. we had a beach bar-b-que and visited a cave on the island. There was nobody else there, but just as we were leaving, a flotilla of at least a dozen boats arrived full of tourists.

The food on board is very good and the young chef takes a lot of care about what he produces. You also get a huge amount of it so you definitely won’t go hungry. The service from the guide and the rest of the crew was also exceptional. Nothing is too much trouble for these guys or their company. There was a young girl on board who got ill – not the boats fault – and had to spend most of the trip in bed. When we arrived back to Halong, Indochinajunk not only gave her a lovely bunch of flowers but some if not all of her money back. They didn’t have to do that, but it was impressive that they did.

Nothing is perfect of course. The cabins are very small, but we only slept in them anyway, and the drinks prices are high for Vietnam, although not so bad compared to UK wine prices in restaurants.

If you are considering which tour to go with, I suggest this one, you will have a fantastic time.

The morning Pho on deck was one of the highlights of our trip to Vietnam. You can get up early and do yoga on the top deck while the mists and mountains float by. Magical! Don’t miss out on kayaking, it was also super fun. Can do right off the ship.

1
9 travellers are considering this tour right now!
Contact us